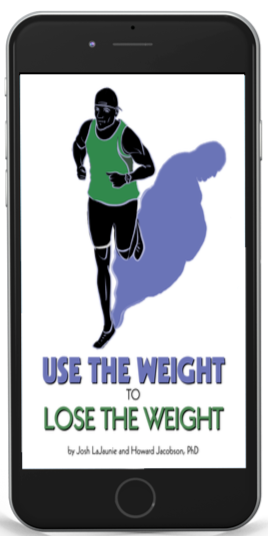 A Revolutionary New Way to Leverage the Strength You've Developed Carrying 50, 100, or Even 150+ Extra Pounds and Claim Your Bad-Ass Status as a Real Athlete!
If you're obese, you probably don't see yourself as an athlete.
You may think that you're lazy, unmotivated, and undisciplined - and beat yourself up for not having the strength of will to lose the weight.
I'm here to tell you that the opposite is true; despite what the naysayers have been telling you for years, you are actually working much harder than any of your skinny friends.
You've been carrying a human weight vest, and it's made you strong. But you've also been carrying the unkind and destructive words that people have hurt you with, and they have made you weak.
I was a fat guy - 420 pounds or more at my heaviest (that's an estimate - you know fat people don't step on scales!), and I had lost and regained a hundred pounds at least five times before I finally figured out what was missing.
Before I embraced both weights - the physical and the psychological - and used them to build the body and mind that I could be proud of.
This book is my attempt to give you the uncensored straight talk about how to lose a lot of weight, and what it's actually like. I was shocked to discover that not everything got better or felt better when I grew lean.
I discovered that many of the strategies I used to lose the weight didn't work to keep it off.
I found that focusing on positivity all the time was a bad idea; that I could embrace the anger at how I'd been treated as a fat person to transform myself.
If you're squeamish about frank and vulgar language, put the book down now. It's not for you.
But if you're ready to hear the rough, unvarnished, and ultimately liberating truth, I'll hold nothing back.
You'll discover how to use the weight to lose the weight - and gain your life.
powered by
Simplero
Howie Jacobson - howieConnect